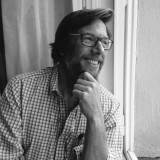 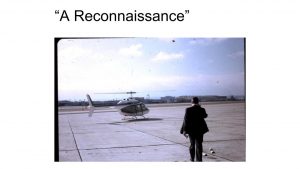 “Temporary Paradise?” is soon to be re-published.  Here is a draft I wrote for the new edition.

I have often asked why did “Temporary Paradise?” resonate so strongly with people when first published? Why has it endured? Why it is still needed?

I would suggest it is not only because of its beautiful illustrations and savvy, technical design, planning, and engineering strategies, but perhaps most importantly through its clear, poetic voice. Early on they say,

its openness, its sun and mild climate, the sea,

the landscape contrasting within brief space are (along with its people)

the wealth of San Diego.

They are what have attracted settlers to the place and still attract them.

They must not be destroyed.”

“Temporary Paradise?” has captured the imagination of people in the San Diego/Tijuana region for years — serving as a touchstone and guidebook for the region on its growth and evolution toward realizing its great potential, by taking advantage of its unique, near divine, natural qualities-its nurturing canyons, its pleasant climate, and its majestic mesas.

A Question Balancing Concern and Hope

Among the brilliance of “Temporary Paradise?” is that it is asking a question.

Basically, is the San Diego/Tijuana region living up to the promise of its unique, devine natural qualities that can help create an urban paradise?

By asking this question they are neither stating San Diego/Tijuana is a paradise, nor that its status is temporary. But they are recognizing its unique potential to reach a form of urban ideal and perhaps, more importantly, that San Diego/Tijuana is at risk of squandering these opportunities altogether. And yet, by posing this question, they convey and underlying balance of concern and hope. And herein lies the brilliance.

In sum, they convey the underlying hopeful message that San Diego/Tijuana is a Special Landscape at risk, and we can do something about it.

But they put this and many great ideas on the table as a guide for people caring about the San Diego/Tijuana region to choose a better future.

And if the question they pose in the title is still in play, we should count ourselves lucky and move quickly toward realizing the promise set forth in “Temporary Paradise?”

Temporary Paradise is also a manifestation of a strong collegial relationship between Kevin Lynch and my father, Donald Appleyard. One that was cut all too short in 1982, when Dad was suddenly killed by a speeding drunk driver on the streets of Athens Greece.

What this partnership created was of great value to San Diego/Tijuana. And there are many things in “Temporary Paradise?” that are as relevant today, if not even more so, than when they were first articulated by Dad and Kevin.

What are these advantages?

In short, they are its landscape, its climate, and its people.

“A Survey of Our Special Landscape”

At its core, “Temporary Paradise? is a survey of our special landscape. And, in the tradition of Geddes and McHarg, it looks at the natural elements that we are built upon. Particularly our climate and our geomorphology. Building on this in my studios and classes I teach my students that our urban region is built upon three main elements: mesas, canyons, and coastal plains.

The combination of these three aspects sets us apart in the Southwest. If San Diego were all coastal plain, it could likely have looked much like Los Angeles – a main point Appleyard and Lynch suggested we avoid.

And these topographic constraints have actually been one of our chief advantages as they have  provided a de facto discipline to our urban form, shaping it toward a modest amount of fairly robust and accessible urban concentrations along corridors, serving to make SD “The City of Villages”. This is even more remarkable when considering the overwhelming planning regime of mid-20th century southern California was hyper car-dominated sprawl (which, of course, SD developed its fair share). One of our challenges now is to continue to build upon this fortuitous and accessible concentration, even in light of countering forces resistant to change.

Unfortunately the canyons have also been used as the right-of-way roads from coastal plains up to the Mesas—a critical concern of Appleyard and Lynch. And they felt this first hand, as working on “Temporary Paradise?” on our dining room table in Berkeley, Dad and Kevin, were confronted by an enormous new freeway thundering up the Canyon from SF and Oakland on its way to the inland suburbs.

They, as should we, caution us to always value the canyons as the exceptional natural restful and regenerative areas of our region–fortunate are we to have them interspersed throughout. 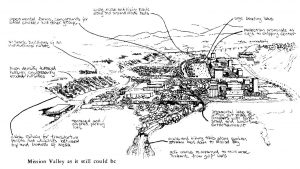 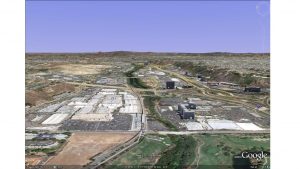 Appleyard and Lynch also highlighted our wonderful fortune of the mesas, canyons, and coastal plains, and the important role they play in cooling us in the hot summers, and warming us in the cold winters, by saying,

“At the shore the climate is mild and extremely stable.

There is a steady breeze from the sea. Mornings are often cloudy, and the afternoons bright….

Not far inland, the sea breeze dies away.

The even climate becomes progressively more extreme as one goes inland:
hotter in the summer and colder in the winter.
There is a little more rain, but still the air and land are dry and the sun shines almost without ceasing.

The climate is harsh, more desert-like, the air still….susceptible to haze and smog.”

As I write this, I am looking out of my apartment at San Diego State University, down the canyon toward the west where I can see the Coastal Fog-bank. While I cannot see the ocean, I can feel it. Eight miles from the sea, as the inland desert mesas heat up, I can feel the sea-breeze coming up the canyon.

For this new, bilingual version, were are celebrating the dream put forth in “Temporary Paradise?” of converting the border between SD and TJ into “a zone of confluence” as a “vital meeting point of two living cultures” that share its water, its energy, its landscape, …, its economy

And they highlight this vision by saying:

“Dreams have some use.

They give us hope, but they also move us to act.

Can one dream about a region as large as San Diego/Tijuana?

In asking where is this dream now, we are struck about how events of recent years have pried us from this greater community vision, as this quote is made valuably salient in light of the dark shadows of fear cast over our regional partners, friendships, and neighbors, now consuming one side of the 2016 Presidential election.

That is why we must re-embrace “Temporary Paradise?”, and its shining beacon of light toward our cross-border collaboration and binational synergy.

Realizing the Promise of San Diego/Tijuana Articulated by TP?

While, 1974 was the year that “sustainable development” was first coined in Limits to Growth, temporary Paradise is in many ways the blueprint for urban sustainability for SD/Tijuana.

Our challenge now, as laid out in “Temporary Paradise?” is to evolve into an urban sustainable pattern not only to keep us from losing our advantages but also to keep the question mark (?), and hence our future sustainability in play.

Already people have felt the change in the climate here in San Diego in the past 10 years — people said it’s become hotter and more humid. And the science bears this out. As those born 10 years after Temporary Paradise have never experienced a cooler year in their lives.

“Temporary Paradise?” Should also be recognized for its technical expertise in guiding innovative planning and engineering decisions, as well as its urban design vision, from building light rail transit, to densifying existing communities through a transfer of development rights.

Temporary Paradise? has led to great things for region, such as our trolley line, the need to preserve our natural areas from the growing suburbs, and one of the most important things is the value of our canyons.

And actions like these are needed now more than ever to ensure that the question mark (?) about whether a region is a “Temporary Paradise?” remains in play.

We can and should think of San Diego as a Paradise. But perhaps we should be clear that this is to be a special kind of paradise–an equitable, binational and hopeful, urban, as well as natural, paradise.

As we are one of the most advantaged regions, in one of the most prosperous states of our nation, our challenge is not dollars and pesos, but decisions–mostly, but not all, by our leaders.

I look forward to working with all who are interested to realize the promise articulated by Dad and Kevin, and the countless others who worked on its development. Most notably, Mike Stepner, who ably assisted them then, and now is one of my most valued colleagues in our work to realize a better San Diego/Tijuana.

If we don’t change our actions now, in the coming years the question mark (?) is at risk of disappearing, and yielding the sad answer to the question posed by Lynch and Appleyard– that the promise of a San Diego and Tijuana paradise was, sadly, temporary…

Next week, I will be in Washington DC for the Transportation Research Board (TRB) Annual Meeting, with more than 12,000 […]

“Livability” has become a popular term in planning, design, and engineering circles, yet there continues to be a lack of clear […]

“Temporary Paradise?” is soon to be re-published.  Here is a draft I wrote for the new edition. Revisiting “Temporary […]

Welcome to WordPress. This is your first post. Edit or delete it, then start writing!